Thanks to ReIReS, three precious scrolls from the holdings of the Martinus Library in Mainz will return to Israel next month.

Here is how the story goes:

During his visit to Mainz in March 2019, Jacobi visited the Catholic Martinus-Bibliothek  (third party in the ReIReS Project) with Alexandra Nusser of JGU, the Mainz ReiRes coordinator, in order to view all Judaica items in the collection. 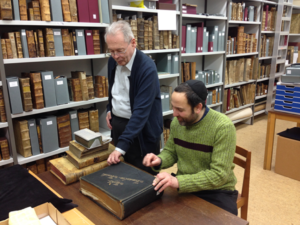 Then, three scrolls which had never been cataloged were presented for examination. According to Hinkel, they had been purchased by Prof. Dr. Nikolaus Adler (1902-1970) on a visit to Israel in the 1960s. Adler served as a Catholic Priest in Mainz and Dr. Hinkel knew Adler personally during his youth.

After consulting with experts at the National Library of Israel and on the international Hebrew Codicology and Paleography online discussion group (which Jacobi co-administrates), it was estimated that the Esther Scrolls may date as far back as the 18th century and that the case of one of the scrolls may be Oriental. Jacobi presented a detailed report on the scrolls to the Martinus Bibliothek, whose director graciously decided to donate the scrolls to the National Library of Israel. According to Dr. Yoel Finkelman, Curator of the Judaica collection of the National Library of Israel, “The Esther Scrolls and Samaritan Bible will make a significant contribution to our extant collection of approximately 200 partial and complete Esther Scrolls from the 15th-20th centuries, from Europe to Yemen, Iran, Iraq, and Northern Africa, as well as eight Samaritan Torah scrolls (13th-20th centuries)”.

June 19, 2019, Jacobi will receive the scrolls on behalf of the National Library of Israel in a ceremony with Dr. Hinkel at the Martinus Bibliothek in Mainz, along with Prof. Andreas Lehnardt, Chair of Judaic Studies at Johannes Gutenberg University Mainz. 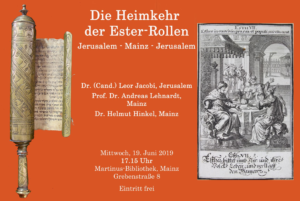 JGU Mainz Welcomes Scholar from Prague at the Hymnbook Archive