Werner de Saeger of the University of Cambridge was granted a ReIRES TNA scholarship, which he used at EPHE in Paris, and at the same time he was one of the first witnesses of the Notre Dame fire on April 15.He wrote a column on this sad event, beginning:

“As I walked out of the Sorbonne library on Monday evening, April 15, just before 7 pm, I saw the first plumes of smoke rise from the roof of Notre Dame, and at first Parisian life continued its normal course. I had just finished an afternoon of archival research, analysing late HDS Professor François Bovon’s writings on early Christianity and his communications with French academic Pierre Geoltrain.

Families and couples took photos, tourists searched their way on smartphones, the typical bateaux mouches (riverboats) sailed past, and everything was peaceful. Moments later, flames were bursting out of the roof of the cathedral, and suddenly both press and police were omnipresent.” 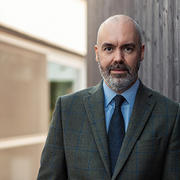 María Fontán Amoedo About Her Research and the ReIReS TNA Scholarship