Painted cityscapes have always captivated the viewers of medieval works of art. To this day scholars are mesmerised by their capacity to mirror the urban context from which they sprang, combined with their ability to symbolize a more abstract world view, religious idea or social ideal. Especially oil painting, which thrived in the fifteenth-century Low Countries among a heterogeneous elite and the well-off urban middling groups, succeeded as no other medium in capturing the urban landscape in its finest details. In order to gain an insight into how late medieval citizens, clerics and noblemen conceived of urban society and space, this book combines a serial analysis of a large corpus of painted city views with a critical discussion of some well-documented and revealing works of art.

Throughout the book a variety of questions are addressed, ranging from the religious conception of the city, the theatrical dimension of urban space, the extent to which Early Netherlandish painting depicted the city as an economic space, how images of city and countryside functioned as identity markers of the donor, and how technical advances in the field of cartography impacted the portrayal of towns in the sixteenth century. In doing so, this study explores the duality of some of the major interpretive schemes that have determined the last few decades of historiography on late medieval Netherlandish culture, oscillating between bourgeois and courtly, realistic and symbolic, profane and religious, and innovative versus traditional. 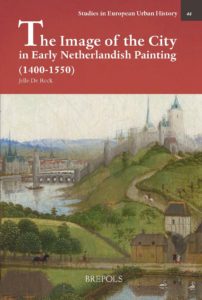 Call for Proposals for the BETH Festschrift

Roma Docta. Northern Europeans and Academic Life in the Renaissance