Ragnhild M. Boe of the University of Oslo is a ReIReS TNA scholarship recipient. She used the scholarship to do research at the KU Leuven under the guidance of Prof. Wim François. We wanted to know more about her experiences and have interviewed here recently.

1.Tell us about yourself, Ragnhild

I studied art history in the 1990’s in Oslo and in Rome. After the finalization of my master-thesis, I lived in Portugal for many years working as an assistant at the Centre for Medieval Studies at the Universidade Nova. Returning to Oslo some ten years ago, I started on a PhD devoted to a French book of hours from the early fifteenth century. Now I am a postdoctoral researcher at the University of Oslo with funding from by Marie Curie (ERC) and Research Council of Norway (RCN) COFUND. This funding allowed me to stay two years at the Courtauld Institute of Art in London and two months at the University of Groningen.

2.What is your topic of research?

My research interests center on the role of religious images of all media in late medieval and early modern devotional practices, in particular as related to indulgences, the cult of saints, and religious emotions in general. I also pursue an interest in the properties and meanings of materials and in artists’ partaking in religious reading. Current projects include the forthcoming monograph Alabaster, Wax and Tears: Three Essays on Matter and Materiality in Late Medieval Art and my post-doctoral project entitled Image, Imitation, Indulgence: Netherlandish Altarpieces and Devotional Practices in Denmark-Norway 1400-1600. 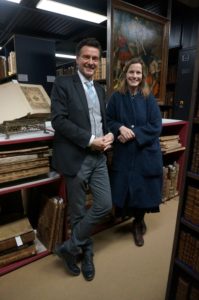 3.Can you tell us a bit about the methodology you developed?

Although I am an art historian, I often take advantage of perspectives from other fields such as anthropology and archaeology. In Leuven, I became more familiar with religious texts and developed better skills in weaving more religious culture – or even theology – into my analyses of artistic works.

4.What benefit did the ReIReS Scholarship bring to you?

The ReIReS Scholarship offered me the possibility to divide my work hours between the Maurits Sabbe Library, of the Faculty of Theology and Religious Studies, and Illuminare, the Centre for the Study of Medieval Art, as well as the Artes library in the Erasmus building, which all proved very valuable for my research. Moreover, it was great to have the opportunity to meet scholars in my field and in adjacent fields. I am very grateful for the kindness shown to me by everyone I met in Leuven. The possibility to talk about my research on the roundtable devoted to “Netherlandish Carved Altarpieces in the Nordic Regions” and organized by Lectio, the Leuven Centre for the Transmission of Texts and Ideas in collaboration with Illuminare, was also much appreciated.

5.What did you learn from each other?

Ragnhild: Wim gave me entrance to the precious books collection of the Maurits Sabbe Library, I was impressed and happy to be able to take a look at many of the more interesting books under Wim’s guidance. We also attended the opening of the exhibition of the great Borman and Sons show in M Museum in Leuven, devoted to the famous sixteenth century family of woodcarvers in Brabant who also produced several altarpieces destined for the Scandinavian market.

Wim: I first heard Ragnhild at the annual meeting of the Sixteenth Century Society and Conference in Albuquerque (NM) and was struck by her approach of integrating the discussion of religious texts in the analysis of altarpieces. More in particular, she analyzed a Brabantine retable in Norway with reference to an indulgence letter. Moreover, I knew that doctoral student of KU Leuven, Hannah De Moor, was and is working on a similar topic, viz. Brabantine altarpieces that were produced for the Swedish market. The idea raised to organize an exchange in Leuven and ReIReS offered here excellent opportunities. I think we here face a beautiful example of how ReIReS can create a surplus value for interdisciplinary and international research in Europe.

How ReIReS is Supporting Scholars: Interview With Carlo Bovolo