The first day of the ReIReS Training organized by the KU Leuven was dedicated to the history of the Catholic university, to its wonderful Maurits Sabbe library and to discovery environments.

Scholars and librarians from all over Europe came to Leuven this week to discover among others the specificity of the collections of the KU Leuven and to become familiar with new research tools.

In his  introduction, which was a geguided tour of the historic city, Mathijs Lamberigts showed the places and buildings that plaid a crucial role in the development of catholic university throughout the ages. Thereby the relation between the university and the Catholic church appeared to be characteristic. Afterwards, he explained the history of the Maurits Sabbe Library, its collections and its challenges. 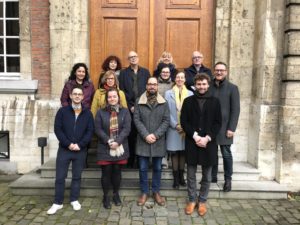 Ward de Pril, faculty librarian, made it clear that more and more content is coming (physical nd digital), but that it is also becoming increasingly difficult to make and keep all that content accessible in the future. The “hybrid”library has to make more decisions than before.

During the discussion it was also mentioned that libraries are becoming  more a place where people are working together to do research, less than a place where you can find books. Digitalization offers a lot more content, but it also has a consequence: it becomes more and more necessary that librarians and scholars interact with each other.

During the first day of the school the participants were also introduced in the use tools like LIMO, Index Religiosus  and (DHGE, the Louvain Dictionary of Church History (DHGE).

University of Sofia Announces Updated Program of the ReIReS School