The Leibniz Institute of European History (IEG) in Mainz is one of the twelve partners of  the ReIReS consortium and is contributing among others to the digital aspects of our project. Read more about it in the blog of IEG scholar Jaap Geraerts, who recently attended our General Assembly in Paris.

“Within this project, one of the main responsibilities of the IEG is the organisation of the various training sessions such DH workshops and training schools that take place at each of the partner institutions. Of particular interest for the DH Lab at the IEG are the DH workshops which allow scholars from the partner institutions as well as from external institutions to become acquainted with various tools and methods that are customarily used within the broad field that has come to be called “Digital Humanities”.

Like every major (European) project, ReIReS has its fair share of administrative duties, including the organisation and attendance of several (annual) meetings. On January 13, 2020, the leaders of the different work packages reported the main achievements of the project to representatives of the European committee at the so-called “Mid-term review”. A few weeks later, a number of meetings, including the annual General Assembly, were held at École Pratique des Hautes Études, situated in the heart of beautiful Paris. Apart from its looks, Paris is also home to a number of great museums and an even larger number of great restaurants, so I kindly offered to attend the General Assembly on behalf of the IEG and its DH Lab (a noble deed, if I may say so myself). 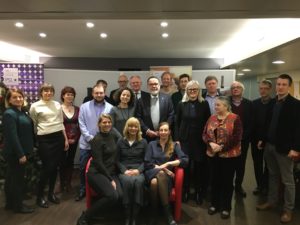 At the General Assembly, the various work package leaders give updates on the milestones reached and the challenges encountered along the way. Although meetings of this kind might seem boring, it actually was really interesting to hear what progress had been made over the course of a year, in particular since most institutions are only involved in a couple of work packages, which renders it difficult to have an overview of the project as a whole. In addition, it’s nice to be in the same room with colleagues. Most project meetings take place online, an efficient and environmental-friendly way of getting ‘together’. However, now and then it is good to be physically in the same room in order to discuss one’s work, get to know each other better, and share a good meal together. After all, the project is a team effort (see the image of some of the team members below)!

Apart from providing an overview, some ongoing work was presented as well. Particularly impressive was the new search portal that has been created (or rather, that is being created) by our colleagues at the KU Leuven. This portal provides access to a range of collections pertaining to the religious history of Europe hosted at the various partner institutions of the project. The portal now is ready for testing and our colleagues from Belgium greatly appreciate any suggestion for improvement you might have.”