The corona pandemic also affects the scholarships awarded by ReIReS. In this blog Elisa Frei is describing her experiences in Mainz, the problems that arose because of the  pandemic and the alternatives that were found.

“My research project for the ReIReS grant at the Johannes Gutenberg University Mainz is “The literary sources of the Jesuit vocation for the East Asian missions (Mainz, XVII-XVIII centuries)”. I am a Project Assistant at the Institute for Advanced Jesuit Studies at Boston College and a Research associate at the Centre for Renaissance and Early Modern Studies at the University of York. I arrived in a spring-like Mainz on March 8th from Bolzano and was supposed to stay there until the end of the month; unfortunately, my research has been interrupted due to the current pandemics—but only temporarily.

I was kindly welcomed on the 9th by Alexandra Nusser, who introduced me to Prof. Dr. Claus Arnold and offered me an office to work in. We visited together the Bereichsbibliothek Theologie and the Universitätsbibliothek. Scholarship holders in Mainz can use the university libraries with their physical and virtual collections, as on top of that the academic libraries of the city and the diocese with their extensive holdings and their own experts. In the Martinus-Bibliothek, I was introduced to the director Dr. Helmut Hinkel and the librarian Martina Pauly, who gave me the first advice on which books coming from the Jesuit novitiate could be found there and how to search them. Alexandra and I then went to the Wissenschaftliche Stadtbibliothek, where the main part of my research was to be done; we discussed the matter with Dr. Christoph Winterer and then started looking for sources. 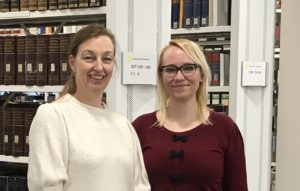 The day after, I was invited to a presentation in the Leibniz Institute of European History (IEG), which is also a ReIReS partner. The speakers were post-doc international students, and everybody was able to put questions in their language, and to be understood (Spanish, Portuguese, French, German). I was positively amazed by it. While there, I also had the chance to speak to the Jesuit expert Prof. Dr. Johannes Meier and to Dr. Markus Müller, who had invited me to give a talk on missionary mobility the following week.

On Wednesday, I met Prof. Dr. Christoph Nebgen: he is one of the first scholars who studied litterae indipetae, which is the focus of my main research and work. With this term we call today petitions written by Jesuits who wanted to be sent to the overseas missions: thousands of them are preserved in Rome, sent from all over Europe. I felt very lucky meeting Christoph: he gave me precious suggestions for my research in Mainz, and also his monograph as a kind present.

During the rest of the week, I consulted the online catalogs of the Wissenschaftliche Stadtbibliothek to find which books were available to the young Jesuits in early modern age, to inspire their missionary vocations. I looked for travelogs in general, editions of letters sent by missionaries from the East Indies and published by the Society of Jesus, vocabularies of Eastern languages, world maps etc. I took pictures of all the significant volumes I found, also trying to understand their usage by Jesuits of the time.

From the following Monday on, unfortunately, the covid crisis arrived to Germany as well: everything started to close and Mainz became less and less crowded. Several people were still walking across the beautiful promenade across the Rhine, but the city centre was suddenly empty. It was also unsettling when one morning the bells of Mainz Cathedral rang for half an hour and I wondered whether it was for the Feast of St. Joseph or an alarm, but Alexandra reassured me that it was an invitation to pray, since the services had already been suspended by then. I tried to rebook my flight back, but it took a few days to find a plane who actually flew to Italy, since almost everything was cancelled.

Two things surprised me most of this ReIReS experience: noticing how many German scholars speak Italian (and so well!), and what a wide network is possible to create in so few days, with the right intermediation. ReIReS fellowship was fundamental in this. Hopefully I will be able to go back to Mainz as soon as the situation improves!”

Elisa Frei, Project Assistant at the Institute for Advanced Jesuit Studies at Boston College and Research associate at the Centre for Renaissance and Early Modern Studies at the University of York