The Trier City Library guards bibliophile treasures of the highest value, which date back to the 7th century. The Codex Egberti, the Trier Apocalypse, the Ada Evangeliar or the Gutenberg Bible should be emphasized. This catalog presents 100 top items from the collection in text and images.

The library, which was created at the beginning of the 19th century, quickly developed into a huge catchment basin for the manuscripts and prints of the secularized monasteries of the Trier area that had become abandoned. In addition to magnificent manuscripts from the entire Middle Ages, there are numerous works from the early days of printing. Worth mentioning are the Gutenberg Bible, the Schedelsche Weltchronik or the Catholicon created by Fust and Schöffer. Texts and fragments from the Old and Middle High German period are also of great appeal, as are maps, atlases and autographs.

This publication offers a representative cross-section of the Trier collection and encourages you to visit the treasury. At the same time, it closes a large gap in the
publications of the „City of Culture Trier“. 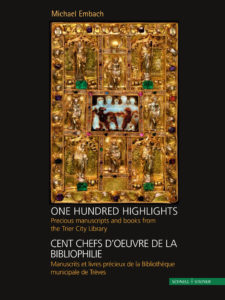