New in the programme of our collaboration partner Schnell und Steiner: Obscured by walls. The Bēma Display of the Cretan Churches from Visibility to Concealment, by Athanassios Mailis.

The book researches the Bēma display of the Cretan churches in a time period spanning from the Byzantine re-conquest of the island (11th century) until the middle of the Venetian dominance (15th century). It focuses on the apparition and distribution of the Templon-barrier, the function of a certain group of frescoes as prostration images and the (partial) establishment of fresco-painted masonry screens at the Orthodox churches of the island, just before the prevalence of the »wooden wall of icons« – known as Iconostasis.

This study reveals the artistic and cultic multiplicity of arrangements, consisting of archaism and modernization, until the crystallization of the Iconostasis as the »distinctive feature of churches of the Byzantine rite«, thus a material proof of cultural identity and religious consciousness of the Orthodox populace in an area (Crete) and a period (Venetian rule) that is characterized by both osmosis and conflict. 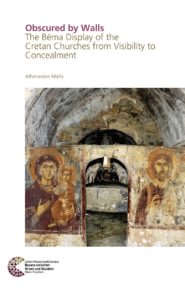 Faith and Knowledge in Late Medieval and Early Modern Scandinavia