The Maurits Sabbe Library of the Louvain Faculty of Theology and Religious Studies preserves a remarkable copy of the Catholic New Testament printed somewhere in 1548 in Leuven by Bartholomew van Grave. It contains the text of the so-called Louvain Bible, a Dutch Vulgate version made in the wake of the Council of Trent by the Augustinian canon regular Nicolaus van Winghe, who lived in the Louvain convent of Saint Martin’s Valley (Sint-Maartensdal), belonging to the Congregation of Windesheim. The translation work of the Bible was supervised by the theologians of the Louvain Faculty. As is usually the case with books of this type, the actual New Testament was followed by the text of the Epistle readings taken from the Old Testament that were read during mass, as well as by a “table” or liturgical reading schedule in which the Epistle and Gospel lessons for each Sunday and Feast-day are listed, with a reference to their place of finding. 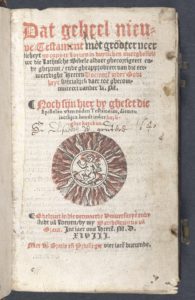 In the liturgical reading schedule some annotations have been added in a kind of late medieval gothic handwriting. Far more interesting, however, is that the New Testament has been bound together with a beautiful manuscript quire that has been written in a style that is somewhat comparable to the annotations in the reading schedule, but whose refinement and ornaments remind us of those being in use at the end of the 15th century in circles of religious women and men influenced by Devotio Moderna. The quire contains a Dutch version of several Old Testament lessons, albeit that the passages go beyond what is proscribed for the liturgy and seem to have served a devotional purpose with a scriptural spirituality.

The bundle or quire must have functioned some time separately from the printed New Testament. This may be deduced from the slightly smaller format in comparison to the printed pages, but the argument is reinforced by the stains on the outer bifolium, which can only have been caused in a period when it was used and read separately from the printed book. Apart from these material aspects, it should be argued that the text of the handwritten quire is not taken from the Old Testament of the aforementioned 1548 Louvain Bible, but from its predecessor, the Vorsterman Bible having editions ranging from 1528 until 1545, so that the conclusion can only be that the quire has been copied in that very same period. It may be an indication that the handwriting and ornamental style was still in vigor in the first part of the 16th Century in religious houses that kept the spiritual tradition of the Devotio Moderna alive. 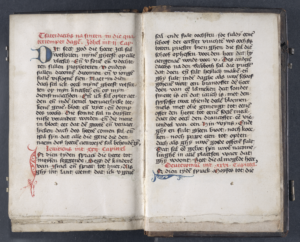 Nevertheless, the quire must have been bound together with the printed New Testament, soon after its publication in 1548. The book binding is still the original one – although restored somewhere at the end of the nineteenth century — and is stamped with a medallion showing the Habsburg Emperor Charles V represented in a half-length figure wearing the crown and a chain of the Golden Fleece. In his right hand he holds the imperial sword and in his left hand the orb (Reichsapfel). Above the medallion, we see a big two-headed eagle with spread-out wings, under which we see, between the columns of Hercules, a banderole with the imperial device PLVS OVLTRE. Under the medallion, we read the words KAROLUS V IMP. While the image of the book stamp had an origin and predominant use in Antwerp in the 1530s and 1540s, it has been argued that a Brabantine monastery must also have possessed such a stamp (obviously Zevenborren, with Augustinian canons regular even so belonging to the Congregation of Windesheim; see Indestege 1961). 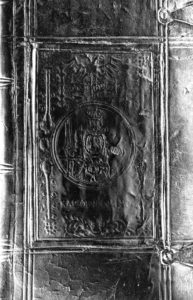 Multi-light & multi-spectral image of the cover with Charles V

A further detail in the New Testament copy at the Maurits Sabbe Library draws our attention: A provenance mark on the title page testifies that the copy was in 1640 in the possession of a religious sister, named Elisabeth de Gru(u)tere. This element, taken together with the style of the manuscript (and the book binding?) makes it plausible that the booklet was from the very beginning kept and used in the environment of a convent. 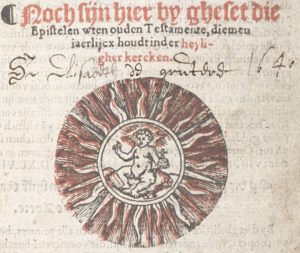 Go here to ReIReSearch, where you can search for Dat geheel nieuue Testament. Follow the instructions on the screen and just ignore the sign-in requests, then you will be able to see the online resource.

ReIReS Dataset in the Spotlight: Maurits Sabbe Library and its Typus Occasionis