Despite corona it is still possible for TNA scholarship holders to do their research at the location they have chosen. We spoke to Filippo Petrucci, who is currently a guest at KU Leuven. Read here what he said about his research and how he benefits from ReIReS.

Filippo, you have enjoyed a ReIReS scholarship in Hamburg and currently you are enjoying a ReIReS Scholarship in Leuven. Can you tell us a bit about it your experiences?

Well, I have a PhD in History of Africa, about Jewish presence in Tunisia and Algeria during the Second World War. I approached the North African Jewish world almost by chance, during the year I spent in Paris in 2002 taking part in Erasmus Programme, as I was involved in a contemporary Hebrew language course during which I discovered an unknown world, that of the Jews of North Africa. After my PhD I had the opportunity to expand my research competencies and network at international level through several grants (awarded by Italian and international organizations), among which: a Postdoctoral Research Fellowship by Yad Vashem in Jerusalem, a research grant by Vidal Sassoon International Center for the Study of anti-Semitism (Hebrew University of Jerusalem), EHRI fellowship at Mémorial de la Shoah in Paris (2016), Zanéa-Caroubi research grant by Fondation Casip-Cojasor in Paris (2018), a research grant by Fondation pour la mémoire de la Shoah (2019). Recently I started a collaboration with the United States Holocaust Memorial Museum of Washington. Between 2019 and 2020 I joined the ReIReS program spending some weeks as Visiting Scholar at the Institut für Jüdische Philosophie und Religion and Maimonides Centre, Hamburg Universität, and at the Faculty of Theology and Religious Studies of KU Leuven.

Regarding my research focus, along the years I worked on expanding my investigation area through analysis of history of the Jewish presence in Maghreb over the last century, Italian Jewish community in Tunisia, Jews of Tunisia and Algeria, and more recently, Egyptian and Libyan Jews.

The experiences with ReIReS helped me to integrate my historical approach with philosophical and political thought developed in contemporary times in the Sephardi world, or, in the case of Leuven, to investigate result of the Second Vatican Council (Nostra Aetate), through reactions of the Jewish Arab relations and communities. 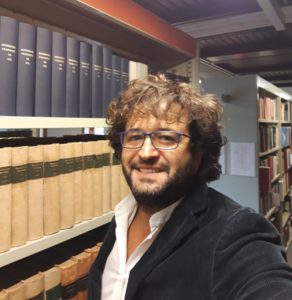 Filippo Petrucci in the libraries of KU Leuven

How did it support your research?

ReIReS was very useful because it allowed me to broaden my knowledge in areas related to my research field but which I had not yet the opportunity to fully address.

It gave me the opportunity to expand my knowledge and list of sources consulted (since I was hosted by centers of great excellence and with vast physical libraries and online resources); finally, it allowed me to meet high-level scholars with whom to discuss, and who suggested new possible research paths. Furthermore, here in Leuven, I also had the opportunity to use precious primary sources, namely the archives of the Second Vatican Council.

Have you encountered any difficulties?

No, of any kind. In both centers I found great preparation, professionalism and kindness (from the professors Giuseppe Veltri in Hamburg and Mathijs Lamberigts in Leuven and from all research teams and staff). I would add that even on the bureaucratic side there were no problems. Also, although very different, both Hamburg and Leuven are two places where it is pleasant to live.

I believe that it is very important to have this type of European projects and I hope that projects like Horizon 2020 will continue in the future as well; because it is essential to have an ever greater exchange of culture and knowledge in the European territory.

What are your future plans, Filippo?

Well, for sure I will continue my collaborations and try to move my investigations to new horizons.

I will spend some time to complete a monograph that I have been working on for some time, precisely on North Africa, but also, and in parallel, write and publish short articles about the materials I collected taking part in the fellowship programmes.

As we live in Covid times, it is not so easy to imagine the next few months, especially in relation to the possibility of taking part in exchange programmes, which is a pity, both from the relational side of research, but also for the possibility of accessing documents and sources (in some cases very precious sources), only available physically outside our country of residence.

Thank you very much for this interview, Filippo!