In the context of sustainability, ReIReS  stimulates the exchange between people of different religions: what do they encounter in the multi-religious society? And how can ReIReS support them? Yesterday a pastor and an imam discussed this.

Pastor Peter Visser and imam Mustapha Benchikhi had met each other before for an interview in a Dutch national newspaper. Now they had the opportunity to continue their conversation and to go deeper into certain themes, in the presence of students of the University of Apeldoorn. 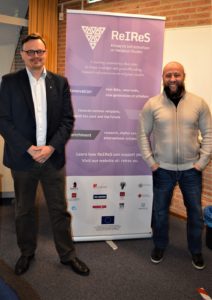 In response to the question “What do you run into in the multi-religious society?” they indicated that these are forms of secularism and a “worldly” way of thinking instead of paying attention to the religious. Also the question of “what is truth?” plays a role in these encounters. Different ways of how to deal with this were discussed by the two guests and the students .

Then the theme of peace was discussed. What is peace according to the Bible and according to the Koran? It became clear that, despite differences of opinion, it is valuable to think about this together in an open atmosphere and to try to understand each other.

From the ensuing conversation it also became clear that peace touches upon various theological concepts like reconciliation and justification, and that it is therefore important to have a good knowledge of theology. This brought ReIReS back into the picture, aiming at making reliable knowledge on religion easily accessible via a research infrastructure.