According to the central thesis presented in the first section of this book, which is preceded by some historiographical observations, Rome’s importance as a place of study has been greatly underestimated, especially for the period after the permanent return of the popes to the city. Written by Michael Matheus.

While many sources have been lost, scholars have devoted much time and effort to unearthing and analyzing the surviving material in Roman and European archives and libraries, allowing for a reassessment of Rome as a long-devalued place of university study. The term place of study (Studienort) is also intended to direct our attention beyond university institutions as such to the considerable range of locations for acquiring education that Renaissance Rome offered.

The second section of the essay collection is dedicated in particular to a comparative, European view of two of the universities founded in the Holy Roman Empire north of the Alps within the context of a more general educational renewal: Trier and Mainz in 1473 and 1477, respectively. Taking the example of critiques of Rome and the pope, the volume’s closing essay illuminates selected controversies that also point to transalpine processes of perception and transfer on both sides of the Alps. The national and confessional discourses that developed above all from the sixteenth century on generated narratives that would have a lasting impact. 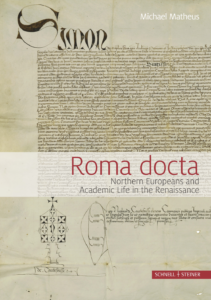 Go to the website of Schnell & Steiner to read more.