At the end of 2020, the Portuegese scholar Maria Luísa Jacquinet stayed at  KU Leuven for a ReIReS scholarship. We asked her about her experiences.

Tell us about yourself, Luísa

My application for this international mobility scholarship for developing bibliographical research at KU Leuven libraries on “Religious Reforms and Catholic Exile in Early Modern Portugal” reveals essential aspects of my path both in academia and in my personal life. And this is true in various ways. I am Portuguese, born in a country (considered) to be peripheral and marked by an intense migratory movement, and, on the other hand, a daughter of Azorean parents – curiously, themselves of distant Flemish ascendency -, who, for professional reasons, moved from the Atlantic islands to the continent. There they lived in various cities from the north to the south of the country. From early on, thus, I have integrated mobility as something familiar and my identity has always been that of an itinerant resident.

In the same manner that my life was not geographically straightforward, my student path was not linear either. I initially studied Law at Coimbra University, but I ended up with a bachelor’s degree in Art History. At the same time, I also studied Italian culture and translation. Afterwards, I completed postgraduate studies in Museology and Heritage and in Cultural Heritage Law. Finally, returning to my alma mater, Coimbra, I graduated with a PhD in Art History. Meanwhile, I worked as a translator, heritage building consultant, researcher, and teacher in secondary and higher education institutions. It was, without doubt, the PhD, dedicated to a specific religious community of Poor Clares in Portugal, that led me to Religious Studies, in which, very early and independently of my academic life, my interest and curiosity were aroused. I developed, then, research focused on the question of post-Tridentine female monasticism, particularly sanctity and ‘orthodoxy’ in women’s convents in Portugal. But it was especially after 2015 – while taking part in the Fifth RefoRC Conference “Crossing Borders: Transregional Reformations”, organized at KU Leuven, where I presented a paper with the title: De Alkmaar à Lisbonne: le parcours d’une communauté monastique entre diverses réformes – that I started to deepen my interest in religious communities and educational institutes established by exiled Catholics in Lisbon between the 16th and 17th centuries.

At present, as a lecturer at the Autonomous University of Lisbon (UAL), I have the opportunity to develop my research both in the context of the university I work for and in the context of external institutions to which I am connected, especially the Centre for the Humanities of the New University of Lisbon, for which the notion of “frontier” is one of the current key-areas of research. As you see, studying communities of Catholic refugees in Portugal and, in particular, the Dutch nuns, is naturally a logical part of a pathway, and it seems to really close a cycle.

What is the topic of your research?

The research project that I called “Far from the Motherland”: Religious Reforms and Catholic Exile in Early Modern Portugal deals with the exiled Catholic religious communities in Lisbon and especially with the Dutch Poor Clares from Alkmaar (Holland) who settled, after an unbelievable odyssey, in the convent of Our Lady of Quietação in Lisbon. The project intends, in general, to analyse the meaning of Catholic exile in Portugal through the systematic study of the religious communities that lived there, as well as the tangible and intangible heritage they left, with a focus upon the following institutes: the abovementioned Monastery of the Dutch Poor Clares, the Convent of the Irish Dominicans of Corpo Santo, the English Brigittine Monastery of St Saviour and St Bridget of Syon, the Monastery of the Irish Dominican nuns of Bom Sucesso and the Jesuit-led College of Saints Peter and Paul as well as the Seminary of St Patrick (for Irish secular priests).

From the time I started to develop interest in this topic, I noticed the existence of several lacunae, that contrast with  long term studies in Portugal about other and more visible confessional frontiers, represented by Jewish and Moorish communities. In fact, despite the existence of some rare studies on specific aspects of those Catholic institutes, there is no general perspective on Catholic exile in Early Modern Portugal. Because these studies consist mostly of monographs or focused articles, these works do not integrate a comparative perspective, nor do they substantially accentuate the transregional and international framework in which the phenomenon of Catholic exile occurred, and the fervent orthodox or counter-reformational atmosphere that framed the arrival of foreign religious communities on the Iberian Peninsula.

Furthermore, many of the those studies adopt a one-dimensional analysis, which reveals the lack of knowledge of sources existing on the different sides of the national and confessional borders and contains still some old, biased views of the “other”.

Moreover, since the subject has not raised, so far, any peculiar interest, let alone consistent academic discussion in Portugal, the contextual, comparative and often critical international literature on this phenomenon is only scarcely available, and the books that deal with it are not systematically purchased by libraries, even in academic institutions. One of the negative side effects is, additionally, that the international literature has only seldom integrated the Portuguese case – which, however, cannot stay any longer at the margins of research about the phenomenon of European-wide Catholic exile.

What benefit did the ReIReS Scholarship bring to your research? And why the Maurits Sabbe Library?

Since the topic of my research refers to an international framework, both historical and historiographic, the ReIReS scholarship appealed, right away, to this “call” for internationalization. Concretely, it gave me the opportunity to access an important and specialized book collection and, furthermore, to interact with researchers and scholars interested in the same topics. Naturally, having visited Leuven in the midst of the Corona virus crisis, the human contact was somewhat limited, but, even so, I had some meetings that allowed me to “transmit” what my research was about, to exchange experiences about it, and, finally, create perspectives for future collaborations.

Regarding bibliographical research, I am thrilled to say that the results were extraordinary. I was already acquainted with the documental and bibliographical wealth of the Maurits Sabbe Library since the time I had been at the KU Leuven on the occasion of two short research stays. I now had the opportunity, with a more focused approach, to deepen my work on my topic, thanks to the conditions that were offered: availability of exhaustive and very recent bibliography, free access to books and academic journals, free online access to a great quantity of works and scholarly papers, extended opening hours and an individual office located in the same library building. Without any doubt, I enriched my knowledge of the subject through a broader perspective and a deeper understanding of  methodology and  theoretical bases.

Which kinds of further collaboration have resulted from this stay in Leuven?

In the short term, I plan to write a scholarly article to be published in an international peer-reviewed journal and to present its content at an international conference. In the medium and long term, however, I hope that a lasting relationship of collaboration or partnership can be established to deepen the academic discussion and exchange among individual scholars and research groups studying the topic, like the Research Unit on the History of Church and Theology and the Research Group on Early Modern History, both at KU Leuven (or even with research centers in the Netherlands, since a Leiden group of scholars, Raymond Fagel and Joke Spaans, published an interesting text edition in Dutch regarding the Poor Clares of Alkmaar). An enduring partnership can be guaranteed by the recent signing of an Erasmus+ agreement between the KU Leuven Faculty of Theology and Religious Studies and the Department of History, Arts and Humanities of the Autonomous University of Lisbon.

In one word, the perspectives are auspicious.

I thank ReIReS and the Maurits Sabbe Library for the extraordinary conditions offered and I hope, with my testimony, to encourage other researchers to join such types of exchange programs. 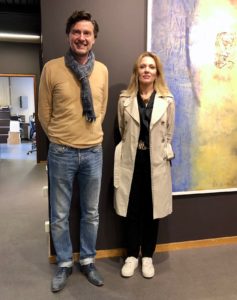 Reunited after One Millennium – the Fruit of Digital Detective Work